Patience. Do you have it–for yourself, for your students? Is it something with which you struggle?

How massive? It’s nearly 7 feet tall and 14 feet wide altogether. Blow it up on your screen. Imagine what it might be like to stand in front of this work in the galleries.

The size and format of this photograph are difficult to ignore. Why is it so large, and why is it tripartite?

Perhaps the artist took a picture with a digital camera, blew it up, and cut it into three sections? Perhaps, if you really like this picture (and if you have a budget for purchasing works of art), you could contact Lutter and have her make a copy of Frankfurt Airport, V: April 19, 2001 for your home?

No and no. Our Lutter photograph is one of a kind, not enlarged, and made not with a digital camera but with the oldest and simplest type of camera out there—a pinhole camera, also known as a camera obscura. We have one at the Museum, nestled in the Park woods:

In essence, a camera obscura is a darkened space with a hole to admit light. Through the hole comes the image, projected onto whatever is opposite the hole. It’s really that simple.

Artist Chris Drury calls his camera obscura in our Park a Cloud Chamber for the Trees and Sky. The trees and sky above the structure are channeled through a simple opening at the top and projected upside-down upon its floor: 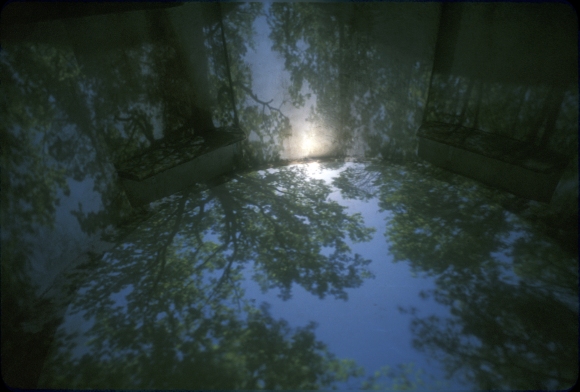 Place a large piece of photographic paper on the floor of this structure on a sunny day. Be patient—leave it there for several hours. In doing so you would mimic, in part, Vera Lutter’s process for creating the photograph Frankfurt Airport, V: April 19, 2001. Areas of light would show up in degrees of gray and black; dark portions such as the shadows of trees and leaves would develop in lighter tones. The movement of branches in the wind would show up in your photograph as passages of blurry mystery.

Lutter transformed a basic shipping container at Frankfurt Airport into a camera obscura to create an image of a single day—April 19, 2001. Not a snapshot of a moment, not an image caught in an instant—but a layering of the movement and stability of humans and objects in the airport terminal over several hours. Her quiet, watchful camera missed nothing happening within its line of sight on April 19, 2001 (how could it?), yet the resulting image reveals less than it obscures. You might say the picture seems more fantasy than fact, despite bearing a record of all that her camera “saw” and despite being unedited.

Consider how different this picture would be if it were taken with a 35-mm film camera, a digital SLR, or a cell phone camera. What does Lutter’s technique and resulting photograph reveal to us that these other means of photography may or may not (about ourselves, the world around us, and the passage of time)? Why do you think she chose this particular method of capturing an image? How might you connect her subject of the airplane/airport to the passage of time?

ELA – literary vs. visual means of showing the passage of time; predicting what happened before or what happens next; telling a story through images or time-lapse video

Social Studies –technological advances in transportation and its global impact

This is the second installment of Timecapsules, a micro-post series on the Big Picture concept of Time. Don’t miss our upcoming special exhibition exploring this theme through a variety of media, 0 to 60: The Experience of Time through Contemporary Art.